Posted by James Sawyer at 5:46 AM No comments:

This is just unreal! A group of fans are working on their own game inspired by the Burton Batman films... and the results are INSANE! Take a look at this recently posted trailer from youtube to see what they have cooking. And if any of those involved are reading this- BRAVO! The mapping of Gotham is particularly impressive (and this is coming from someone who knows what a task it is to make sense of the city). If you ever feel like chatting about it, hit me up at james@1989batman.com

Posted by James Sawyer at 9:08 AM No comments:

Posted by James Sawyer at 4:58 AM No comments:

Posted by James Sawyer at 10:48 AM No comments:

Posted by James Sawyer at 1:56 PM No comments:

The Burton Batman films created quite a fervor for the comic book retailer in the late 80's and early 90's. Check out this promotional kit DC Comics sent out to retailers for the release of the Batman Returns tie-in graphic novels (the Batman Returns Comic Adaptation, "Catwoman: Defiant", & "Penguin: Triumphant"). Included are posted, stickers, bookmarks, shelf talkers, window advertisements, a pop-up display... even ad slicks for your local newspaper and a script for radio spots?!? Can you imagine having this much advertising effort for a comic book today?

Posted by James Sawyer at 3:02 PM No comments:

Hello again! Another objective I have for the site this year is to go back and finish reviewing many of the Batman toy lines- Kenner, Mattel, DC Collectibles, etc. The first one I'd like to tackle is the one I have done the least of actually. :) We only managed to review 3 of the DC Collectibles Batman The Animated Series releases! I want to change that... so starting now, I plan to review EVERY release in the DC Collectibles Animated Universe lines. My goal is to start at release #01 and work my way through the entire line. The format will be a bit different. First- It will be just me doing the reviews. The boys (I mean "young men") are sometimes busier than I am, so getting all 3 of us together for a review is problematic. Second, I am foregoing doing the pictures as they are a time-eater. So it will be just a short video review of each release. And since I am starting at #1, this means I will be re-reviewing the three we already tackled so that all the reviews match in format (but don't worry, those original reviews will still be here too). To get my juices flowing, I decided to start with the Superman The Animated Series Superman & Lois Lane 2-pack, as this is the only release under the STAS branding. Enjoy! And please head over and subscribe to my youtube channel to follow along with the reviews!

Posted by James Sawyer at 8:31 AM No comments:

Hey all! James here... I know I haven't been as active on here lately- but I am hoping to rectify that this year. A lot of the new content will focus on "Batman The Animated Series" (toy reviews, updates to the Style Guides, magazine articles, etc), since I have always felt it goes with the Burton Batman franchise like peanut butter and jelly. But of course you can still expect to see some Batman '89, Batman Returns, and Robin Relics posts as well!

Today's post is obviously focused on BTAS. :) A couple of decades ago, I acquired this mock-up Joker House playset from a former employee of Kenner Toys. At the time, I didn't have my own website to feature it at, so my pal Jason Geyer volunteered to feature it at his site- Toy Otter. As things go with old articles on sites, the Joker House feature was lost to time... Thankfully, Jason saves everything. :) So now this lost treasure has a new home here at 1989Batman.com! Huge thanks to Jason for saving these circa 2001 digital pics as I gifted the playset to a friend long ago (and it has now changed hands to I-don't-know-who). Here is Jason's original text that accompanied these pictures:

Well, we all know that in the toy industry, what you see is not altogether everything that was planned. Many, many designs, concepts, artwork and sculpts never make it into the public eye. Case in point is this wonderful prototype of a "Joker's House Playset", originally designed to fit into the Batman: The Animated Series line from Kenner. A nifty item, the whole thing is based on skewed angles and distorted images.

Made out of plastic, styrene, cardboard, and whatever else the designers could get their hands on, this playset has many different action features, a nice colorful palette, and would have been a welcome addition to the B:TAS line, especially as the villains rarely get any kind of consideration. Unfortuantely, with all of the product on the market at the time, it was felt that this piece would be crowded out, and not sell well. The fate of many of these unreleased prototypes is usually a short trip to the dumpster, but this one was rescued at the last minute. Who knows what else has been disposed of over the years? It's a tragedy that while Star Wars collectors have been meticulous about finding unproduced items, the superhero community isn't quite as lucky. 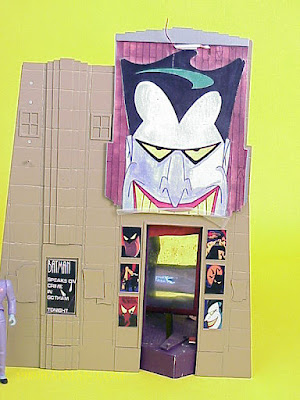 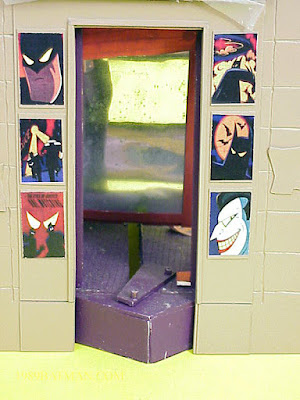 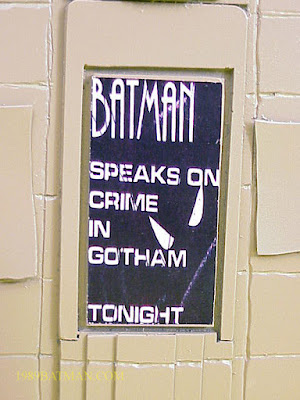 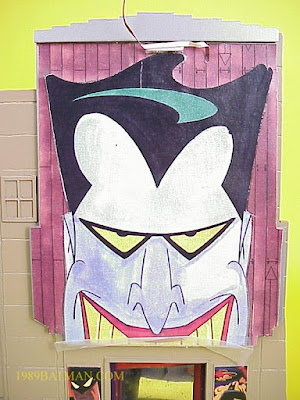 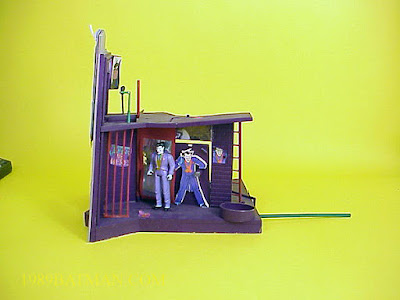 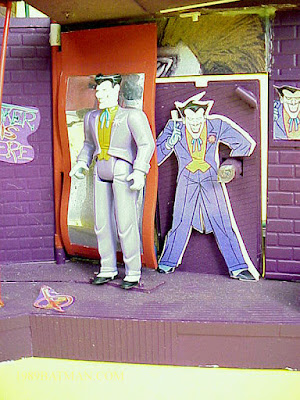 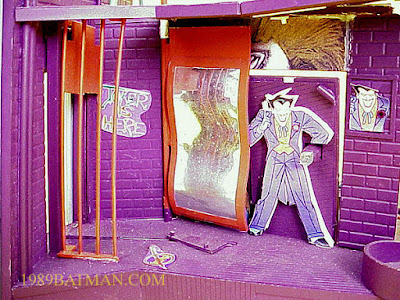 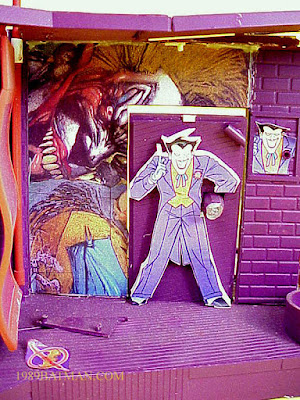 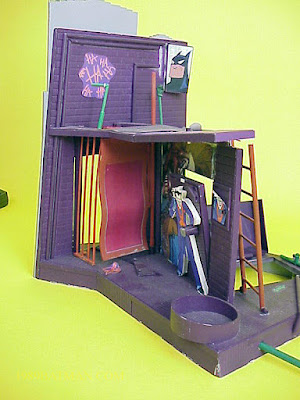 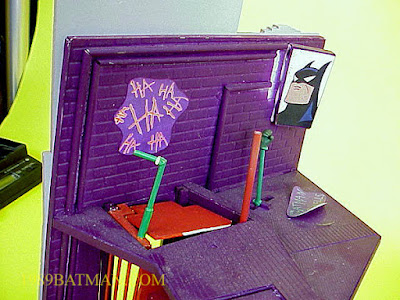 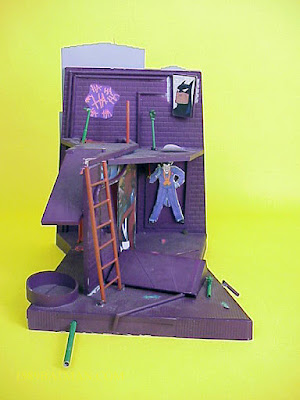 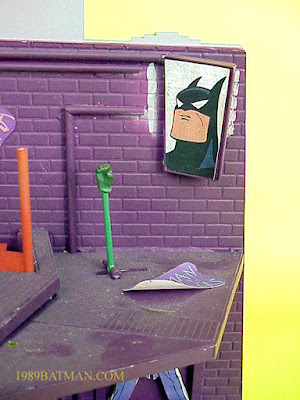 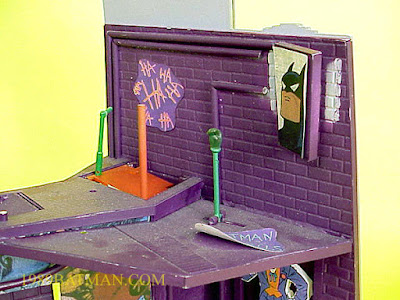 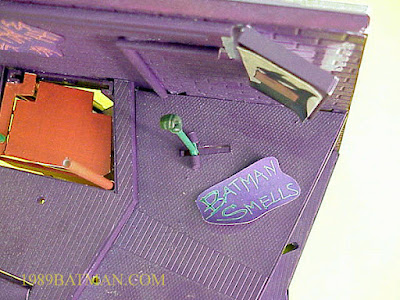 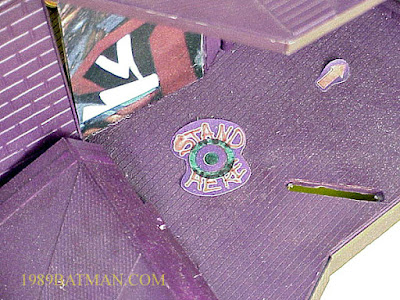 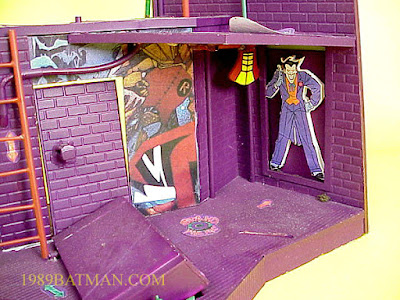 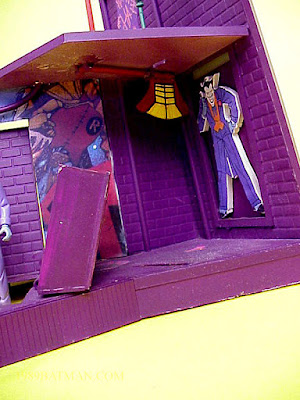 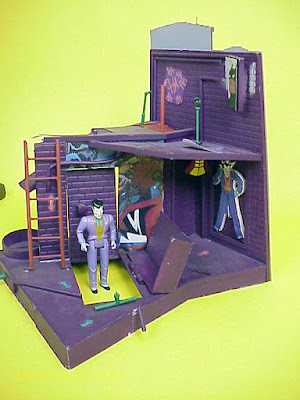 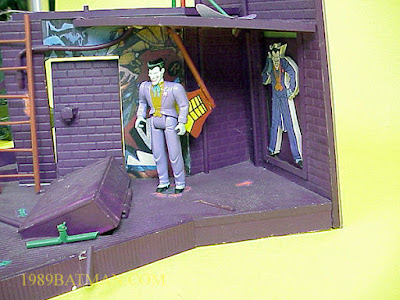 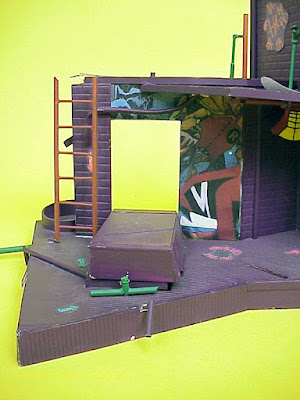 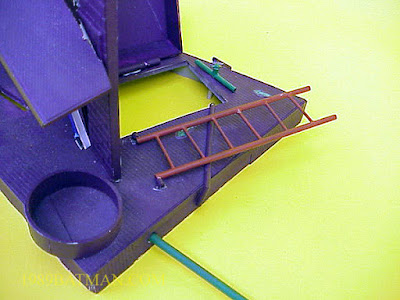 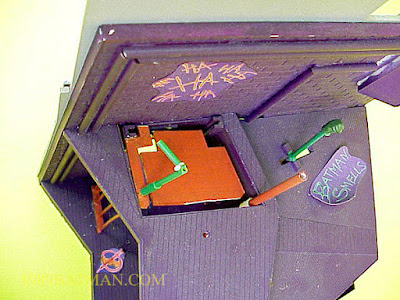 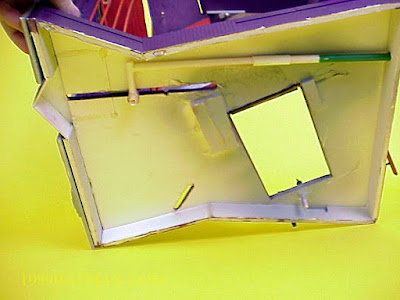 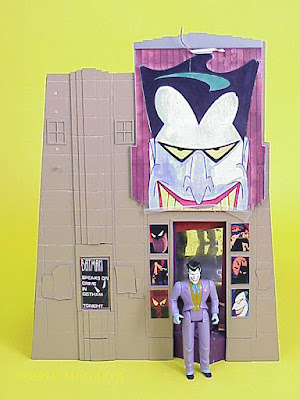 Posted by James Sawyer at 6:25 AM No comments:

Email ThisBlogThis!Share to TwitterShare to FacebookShare to Pinterest
Labels: Unproduced Kenner Toys Joker House Playset
Newer Posts Older Posts Home
Subscribe to: Posts (Atom)
A site dedicated to the 1989 Batman film and its sequel Batman Returns! Here you'll find loads of content related to the movies: Old magazine articles, video segments, vintage newspaper clippings, and a large focus on movie merchandise (especially the Kenner toy lines). All the views and opinions expressed on this site are mine and should not be viewed as being shared by any of the companies and parties responsible for the film.